The winners, celebrated at a special awards ceremony at the Marina Del Rey Hotel, have been chosen from thousands of entrants, whittled down to hundreds making the trip to California. The ceremony, led by Red Herring chairman Alex Vieux, was preceded by two days of keynote speeches, discussions and finalist presentations.

Nuvve Corporation, a startup based in San Diego, California has developed, and is now commercializing, revolutionary software that will enable electric vehicles to be integrated with the electrical grid. The Grid Integrated Vehicle platform, GIVe™, will assess at any time the needs of the driver, as well as the requirements of the grid by creating a virtual power plant that will act on energy markets. The resulting revenue is then shared with the electric vehicle (EV) owners, contributing to lower the cost of owning an EV. The flexibility of this solution allows EVs to support the inclusion of new intermittent renewable energy sources such as wind and solar by providing a carbon neutral solution that is replacing traditional power plant services.

Gregory Poilasne, Nuvve’s CEO said: “we are very proud to receive this recognition. Our Vehicle-to-Grid (V2G) platform enables electric vehicles to be greener. We are world leaders in V2G and are actively deploying our system to electric grids on five continents, to support the rising numbers of EVs and meet CO2 reduction targets. We are changing the paradigm in which consumers can now be empowered to manage their energy and have access to energy markets, that were until now mostly available to large incumbent energy players.” 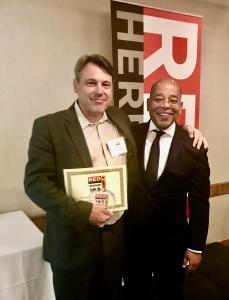 Companies were judged by industry experts, insiders and journalists on a wide variety of criteria including financial performance, innovation, business strategy and market penetration. Winners ran the gamut of verticals, from fintech and marketing to security, IoT and many more.

Red Herring’s editors have been evaluating the world’s startups and tech companies for over two decades. It gives them the ability to see through the industry’s hype, to pick firms that will continue on a trajectory to success. Brands such as Alibaba, Google, Kakao, Skype, Spotify, Twitter and YouTube have all been singled out in Red Herring’s storied history.

“2018’s crop of Top 100 winners has been among our most intriguing yet,” said Vieux. “North America has led the way in tech for so many years, and to see such unique, pioneering entrepreneurs and companies here in California, which is in many ways the heartland of the industry, has been a thrilling experience.

“What has excited me most is to see so many people forging niches in high-tech and cutting edge sectors,” added Vieux. “Some of the technical wizardry and first-rate business models on show here at the conference has been fantastic to learn about. We believe Nuvve embodies the drive, skill and passion on which tech thrives. Nuvve should be proud of its achievement: the competition was incredibly strong.”

Nuvve recently announced successes in multiple geographies; notably in Denmark where it is expanding its operations, in the UK and France where it is deploying large-scale V2G fleets, in California and in Japan where it is collaborating to the first pilot programs.

“This recognition follows from several recent successes we have had, with new projects and EV fleets being added at a fast pace across the globe” said Gregory Poilasne. “We are a young growing company, but able to work on multiple continents and across multiple diverse cultures, it’s an essential attribute to be successful in today’s complex global energy environment.”

Following Nuvve’s Top 100 win it is invited to showcase itself at the Top 100 Global event in October. Red Herring is dedicated to supporting Nuvve’s continued path to success and innovation.

About Nuvve: Nuvve Corp. is a San Diego based company, whose mission is to lower the cost of electrical vehicle (EV) ownership while supporting the integration of renewable energy sources, such as wind and solar. Their Grid Integrated Vehicle platform GIVe™ transforms EVs into grid assets when plugged while guaranteeing the expected level of charge when the vehicle owner needs it. The aggregation of thousands of electric vehicles into a virtual power plant using the GIVe platform, allows Nuvve to participate in electricity markets with a power capacity comparable to traditional generators. Based on vehicle-to-grid technology or V2G, the GIVe platform gives benefits to public organisations, businesses and homes by reducing the cost of electric infrastructure and reducing CO2 emissions.