On July 24th and 25th California ISO issued a FlexAlert to encourage users to curb their electricity consumption during a high energy consumption event in California caused by a sharp increase in temperatures in the west of the United States. When the mercury rises, increase use of air-conditioning or refrigeration creates a surge in electricity use. Users are asked to reduce their consumption by changing their thermostat settings and avoiding to use large appliances during the time periods from 5pm to 9pm. You can sign up to receive FlexAlerts notifications here.

California ISO reported that following the FlexAlerts, 990MWh of energy savings occurred through the reduced consumption. Nuvve Corporation also responded to the alerts through instructing Electric Vehicles (EV) to send electricity back to the grid through 7 bidirectional chargers it has installed at the University of California San Diego as part of the INVENT project, a project led by Nuvve and funded by the California Energy Commission. The resulting energy restored to the grid during the two days was of 128kWh. The EV fleet was comprised of a mix of different bidirectional vehicles with 3 different size of batteries. 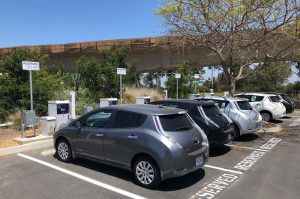