Electric vehicles as the “cash-back car”

Denmark has more renewable power on the grid than most other nations, mostly wind power, and that variable power source presents some unique problems that can put some strain on the grid. What if the batteries in a fleet of electric vehicles (EVs) could provide a distributed storage resource for renewables?

V2G describes a system in which EVs or plug-in hybrids communicate with the power grid to create demand response services by sending electricity into the grid, either by staging their charging rate in a process called demand dispatch or smart charging, or by using the vehicle battery to provide ancillary grid services.

Denmark will be one of the first test markets for V2G with a technology and an architecture from a firm called Nuvve — allowing EVs to sell back power from their batteries to the grid.

Nuvve is using V2G aggregation technology developed at the University of Delaware, with the goal of transforming fleets of vehicles into intelligent distributed storage resources. The EV communicates with Nuvve servers that aggregate multiple EVs into a small “virtual storage network.”

It’s estimated that an EV is parked 95 percent of the time. V2G allows the parked EV to charge and discharge its battery to the grid in response to requests from an entity such as a grid system operator. The system operator can treat the vehicle as a smart load, delaying its charge, charging more slowly/quickly, or as a generator that can contribute small amounts of power to the system if the driver allows it. These capabilities, when combined with other EVs, might constitute sufficient capacity to bid into ancillary service markets, producing a revenue stream for the vehicle owner — if the regulatory and technological landscape permits.

Nuvve claims that the Danish testbed, starting with 30 cars, will allow EVs to sell back power from their batteries to the grid — compensating the EV owner up to $10,000 over the life span of the car. Nuvve’s innovation is in the server connecting the EVs to the grid operator and in sharing revenue with the EV owners, potentially reducing the overall cost of the EVs. Nuvve’s server is the arbiter between the EV batteries and the power market through the system operator.

Energy storage is a non-intuitive and tricky market to crack. The seemingly obvious energy arbitration market — buying low at off-peak and selling high at peak — is the least rewarding revenue stream in the current regulatory scheme. Ancillary services like frequency regulation might be the lower-hanging fruit in the V2G application.

The world market for frequency regulation is large, currently around $6 billion, and estimated to grow to $12 billion by 2020, according to Nuvve.

“The grid of the future will meet many challenges; one of them is the EV and plug-in. Right now, the grid has no trouble handling the relatively low number of EVs in operation, but in the long term, they are going to be a negative impact on the grid unless we charge them intelligently. NRGi is always searching for new technologies and business models seeking to stabilize the grid and increase the share of renewables in our power production. That’s why we’re now taking a very close look at Nuvve’s interesting set-up,” says Søren Sørensen, CEO of NRGi, the fourth largest utility in Denmark.

This plan is interesting, but, like any new energy idea, it is fraught with regulatory and societal issues. The utilities can’t exactly consider these tens or hundred of thousands of vehicle batteries as part of their rate base. And there is the issue of the regressive nature of taxing the rate base to enable the production of $100,000 Tesla sport cars.

Serdar Uckun, Manager, Embedded Reasoning Area at PARC, has said that the heralded ‘cached energy’ concept of V2G was a “red herring” and “not likely to work.”

And here’s another question: What happens to the vehicle manufacturer’s warranty?  Since batteries will be warrantied in miles, wouldn’t using the battery for V2G void the warranty?”

Nuvve CEO Gregory Poilasne said, “Nuvve takes the battery warranty issue very seriously. Currently, independent parties, including some automakers, have already expressed that the impact of V2G on the battery will be much less than 5 percent. More over, Nuvve’s patented solution can be tailored for each vehicle and limit the wear on the battery depending on automaker specifications. Finally, by incentivizing the EV owner to plug in his car on a very regular basis rather than fully cycling the battery, we are expecting that our solution will actually increase the battery life when considering the real configuration of use and therefore has no impact on battery warranty.”

Professor Willett Kempton and CTO at Nuvve said, “V2G is not just a concept but a reality. We have been operating a half-dozen cars, driving and also aggregating them to provide grid services for the PJM market. These cars are operating and meeting dispatch and reporting requirements by one of the world’s largest grid operators — and furthermore, generating revenue by doing so.”

Nuvve provides a V2G solution including hardware, software, and services for connecting utility infrastructure to electric-drive vehicles. For vehicles equipped with an AC propulsion or other electric drive train capable of bi-directional power flow, there is no need to change any hardware, according to the firm.  Cars with bidirectional drive trains include the 2012 Mitsubishi MiEV, the 2012 Daimler Smart E, and the BMW Mini E.  Nuvve is in the process of opening an office in Horsens, Denmark.

Greentech Media Research’s smart grid analysis team has taken a long look at the EV landscape in this report.

Nuvve is participating in the Smart Grid Applied conference June 22 and 23 in Menlo Park, California. Nuvve’s CEO Gregory Poilasne will speak on a panel with DONG Energy, Danish Technological Institute and Coulomb Technologies on how to intelligently integrate EVs into the grid.

A recent Black & Veatch survey of utilities predicts EV load to be significant:

Here is a Nuvve schematic of power flow in a V2G implementation. 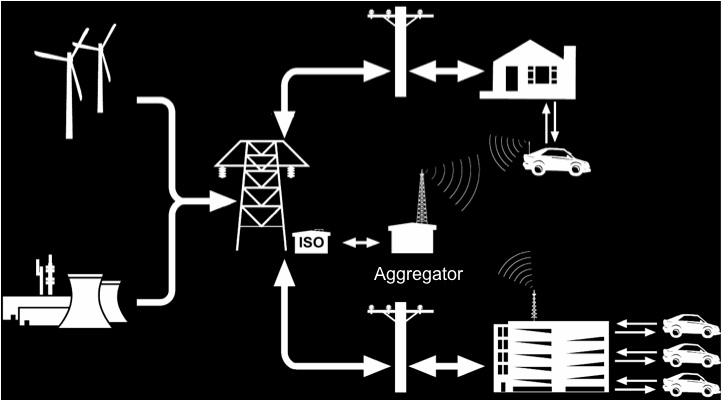